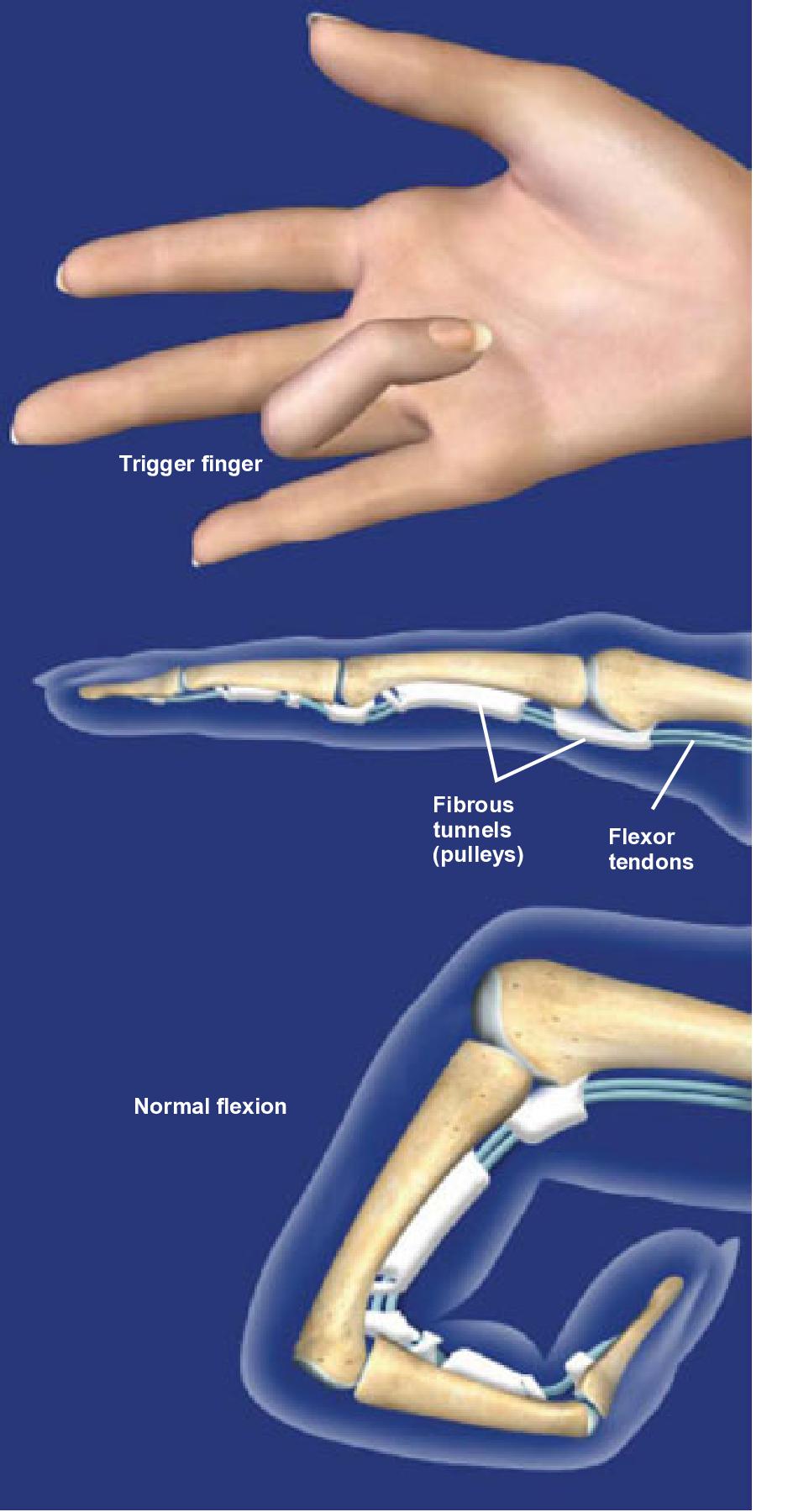 This common condition, also known as stenosing tenosynovitis, is a narrowing of a portion of the tendon sheath in the finger or thumb that interferes with normal finger movement. This condition most commonly affects the ring finger, but can affect any digit. It is more common in middle-aged women, but anyone can be affected, even newborns.

This condition may be caused by overuse or repetitive use of the hand. Normally, as a finger is bent and extended, the finger’s flexor tendons glide smoothly through a series of fibrous tunnels in the finger and hand. Trigger digit results from a narrowing of the fibrous tunnel in the palm called the first annular (or A1) pulley.

Forceful flexion of the fingers causes stress at the A1 pulley and can lead to bunching of the fibers within one of the tendons. The tendon can swell and thicken, forming a bump called a nodule. The pulley also thickens and narrows, and the swollen tendon or nodule has trouble passing through the narrowed pulley during attempts to extend the finger from a flexed position.

Several medical conditions can increase a person’s risk for trigger digit, including diabetes, rheumatoid arthritis, gout, renal disease, and other inflammatory conditions. In rare instances, trigger digit can also result from direct trauma over the A1 pulley.

The first symptom is typically a mild grating, crackling sensation at the metacarpal head when the finger is flexed or extended. This may be accompanied by pain. A bump may be felt beneath the skin on the palm at the base of the affected finger. The finger may be difficult to extend, and may click or catch as it is extended. Commonly, a person may wake up in the morning with the finger held in the flexed position. This catching may become severe, and, if left untreated, the finger can become permanently locked in the flexed position. Finger stiffness may also develop in chronic cases.

Treatment options for very mild and early cases may include activity modification, splinting, or anti-inflammatories, but the results are unpredictable. Most commonly, a steroid injection to the flexor tendon sheath is recommended because of its high success rate. Diabetics and patients with rheumatoid arthritis may have less success with steroid injections. If injection does not relieve the symptoms, the next step is surgical release of the pulley. Hand therapy may be recommended after surgery or if finger stiffness is present.